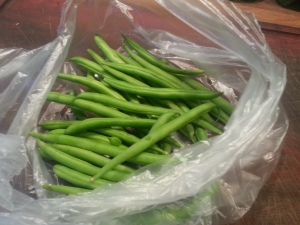 So I decided to make rainbow soup today.

It’s not actually called rainbow soup. I just like it and it’s got a lot of colours so that’s why.

I don’t really feel like doing an official recipe so I’m just going to show how I made it.

Starting with about two handfuls of green beans.

I hate green beans when they’re stringy or have big beans inside or are gigantically overcooked. Other than that I quite like them.

If you want to make sure they aren’t stringy, there’s a trick to cleaning them. If you sort of use the knife to pull the tip of the bean towards you while cutting, you can get the string to come with as well. I hope the picture sort of shows that.

It’s really hard to take a picture while holding a green bean in one hand and a knife in the other.

I cut the beans into small pieces, probably around 1-1.5cm. I guess that averages out around 0.5in. Does it matter? Not really.

Then there’s the big pot of chicken stock. Two litres. I’m lazy and I always use ready made stock from jars. It’s just so much easier.

I prefer jars to making stock from cubes because this way I can just put it in the pot without thinking about it. I do add plenty of water because I don’t usually like very salty food.

This is called a lombok. It’s a chili pepper used in Indonesian cooking. I’m not actually cooking Indonesian food this time but it’s the most common pepper available in the Netherlands. I think it’s a variation of the Cayenne pepper.

I like lomboks because they’re spicy but not insanely so. Plus they have an awesome red colour.

This one is about the size of my hand. 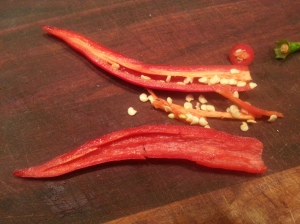 There’s a couple of ways to clean chili peppers. I prefer cutting them lengthwise and then scraping out the seeds and interior.

The more of the orangey interior (seed ribs) you remove, the milder the taste will be. Today I’m not interested in sniffles so I’m removing most of the insides.

After that I’m cutting them into small strips.

I’m mostly doing it for the colour.

Then it’s on to the tins.

Crispy mais. I don’t know what’s so crispy about it. It’s just maize kernels. Or corn kernels. You know what I mean. There’s a picture.

I always make sure to buy the kind without added sugar. Seriously. Maize is sweet enough already. Silly people.

I drain off the water in the tin before adding the contents to the chicken stock.

I had to put in quite a bit of effort to get this picture. The maize kept sinking to the bottom of the pot. And as with the green bean and the knife, it’s a bit hard to take a picture while stirring soup with a really big ladle and making sure the pot stays in place. 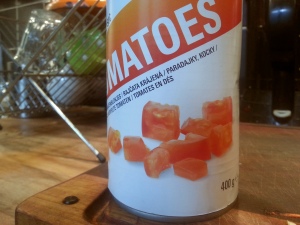 The sacrifices I make for this blog.

Diced tomatoes. No idea why this tin is in English, since it’s actually a Dutch brand. 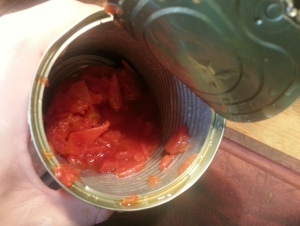 This step in the preparation might be a leftover from when I didn’t eat tomatoes. What I do is I take the diced tomatoes and rinse them about a thousand times till I only have the bits of tomato meat left and no juice.

Fresh tomatoes are not an option (even though I actually like those now) because the skins peel off in a nasty way and peeling them beforehand is a lot of effort.

I might try peeled tomatoes but I’d have to rinse those as well. And they feel icky when you’re cutting them up.

So rinsed diced tomatoes it is. Rinse rinse rinse. Not much left when I’m done rinsing.

Without the juice the soup doesn’t become a red cloudy mess either. We want rainbow soup, not tomato soup.

(Oh, on a side note: at my supermarket they have like half an aisle filled with different types of tomatoes. It is 100% impossible for me to pass it without starting to sing “Let’s call the whole thing off” softly to myself). 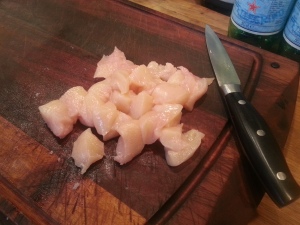 Time to clean and dice the chicken breast.

Yeah, I know you can get pre-diced chicken breast. But I’m very particular about icky bits in my chicken. I’ve learned how to eat (and love) other parts of grilled chickens, but breast definitely needs to be skin and tendon free. So usually I prefer buying a whole breast and cleaning it myself. I’m better at it than their machines.

You don’t want to know how often I find bits of bone.

Potatoes next. (Potayto! Potahto! Let’s call the whole thing off!)

I use a specific potato breed called “Eigenheimer” from Friesland. The Dutch have a thing about potatoes. But any fluffy, starchy potato will do.

What I want is for the bits of potato to become soft and crumbly when I eat them. But they shouldn’t be dissolving while still in the soup. I don’t want thick starchy potato soup. 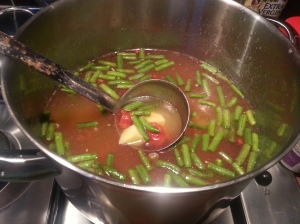 Let’s go and bring that mother to a soft boil.

I usually aim for about 30 minutes. The chicken and potatoes need plenty of time to cook.

While the soup is softly bubbling to itself, I’ve got time for my favourite part.

I love it. A lot of people hate it.

That’s ok. Autistic people know everything about “irrational” dislikes of food so nobody here is going to force anyone to eat something they don’t like.

I’m just going to make you look at it.

And now I’m going to take my big-ass knife and destroy the pretty green leaves.

Well, I’m not that fast. This is a really sharp knife and I still can’t feel the tip of my left ring finger from where I cut into it with this same knife in January. So… proceed carefully. But thoroughly. 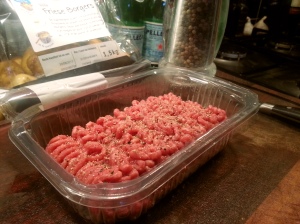 Because I’m going to make meatballs! And my experience with not-so-finely chopped coriander is that it’ll end up everywhere (plate. frying pan. hands) except inside the meatballs. 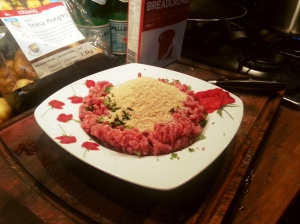 Lean ground beef. Seasoned with some fresh black and white pepper and a pinch or two of salt (I use literal pinches. Like what I can pinch between my thumb and first two fingers). Again, I’m not that fond of salt but you can add more if you want. 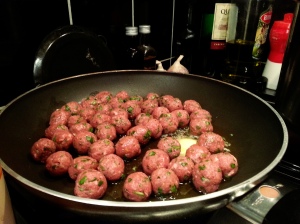 Next, I add the coriander, a small egg, and some bread crumbs.

The egg and bread crumbs are purely optional, I only add it because the meatballs turn nice and brown when frying with a bit of egg in the mix, and it makes it a bit easier to roll the balls and not have them fall apart in your hands or while frying.

But it does make everything a lot ickier to touch. So I can understand if you skip this part. 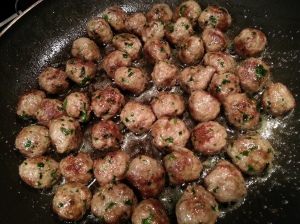 Knead the meat until it starts feeling like bread dough. If it’s still really sticky and slippery, add some extra breadcrumbs. You literally want a bread dough feel. That’s the easiest for rolling the meatballs.

(This feeling is not applicable when not using egg and breadcrumbs. Then you’re on your own. I’m so mean).

Take a bit of meat about the size of your thumb and roll it between your palms in a circular motion until you get a ball.

I always try to minimise amount of washing up, so I usually put the meatballs directly into the frying pan. Not heated up yet. Just a little bit of olive oil to prevent them from sticking to the pan and a small pat of butter (about thumb size) for the nice frying action later on.

Repeat lots of times until you run out of meat.

Then turn on the heat underneath the frying pan and fry the meatballs until they turn brown, on a high to medium heat. Depends on how much it’s splattering. I don’t like splatter, it always ends up on my hands and then I have burns and that hurts.

Turn off the heat under both pans (yes, the soup was still softly boiling, remember?) and add the meatballs to the soup. Again, try to avoid splatter. Boiling soup is hot.

What do you mean, accident prone? I only have cooking mishaps about once a month or so.

And it’s so worth it.