Apologies for the NSFW language. But not really. My words have decided to go play hide and seek again tonight. Not as badly as the night of my first blog post, because I can still write, although it takes a bit more effort than usual.

Yeah, not so good. 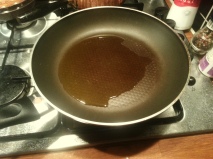 This is how I clean chicken breast. I cut off a lot of weird bits, as shown on the left of the first pic. Then dice it into pieces of about one inch, as shown on the right. It’s hard to do this because it seems so wasteful, but part of my “Life As An Adult” motto is that it’s more wasteful to throw out food because I can’t eat it due to ickyness. So. I simply don’t buy meat everyday. And when I do, I’m allowed to cut off the weird bits.

Next, I put a bit of olive oil in a frying pan, just enough to cover the bottom, add chicken pieces, and put it on a medium to high heat. Basically just high enough to make spluttering noises but not so high that there’s oil flying everywhere.

Then I ignore the pan for a while and start sorting out the lettuce. See, the thing is that I really like this mixed bag, but they’ve started putting too much onion in it and that’s smelly and awful. So I pick out all the actual leaves. I can do that, I’m an adult now. Even if it takes 10 minutes.

Which, incidentally, is about the time needed for the chicken pieces to become nice and brown and crispy. Put the lettuce in a bowl and stir the chicken to get it to brown on the other side as well. Be careful of oil splatters.

Next, I want to add the cottage cheese to the salad, but as it turns out the best before date was about a week ago. Yay executive function! Disregarding that, I rely on my awesome autistic senses to taste if it’s gone off. Oh, actually it has. Yay autistic senses! So I use some mozzarella instead, diced into small bits.

Then I slice the cherry tomatoes into quarters. The chicken should be completely done by now so I add everything to the bowl, then add some extra virgin olive oil as a dressing. I don’t use store bought dressings, because vinegar and sugar and lots of crap. This salad doesn’t need it.

You can leave out ingredients or add others if you so wish (cucumber!). That’s the great thing about salads. You can add whatever you like. Except if you don’t like lettuce, then you might have a problem. But even then, fried chicken bits with tomatoes and cottage cheese is pretty yummy as well. 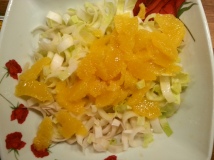 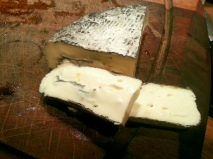 So, endives. Also called chicory sometimes. It’s a very popular vegetable in the Netherlands. I don’t really like it when it’s cooked. But raw? Yum. I have this thing for bitter tasting stuff. If bitter is your thing as well (there’s a reason chicory root is used as a coffee substitute), then you’ll probably like this salad.

Anyway. Clean the endives, remove any outer leaves that look shrivelled or brown. Slice into small strips, about half an inch wide. I cut off the tip here because it was green, basically the more green the more bitter, but there is a limit to what I can take. After I’ve sliced up the endives, I take out the inner core which is a bit tough and again, very bitter.

Then I cut the oranges into segments.

Once I’ve done that, I add some walnuts, about five of them broken into small pieces. Say a small handful.

For the blue cheese, I’ve chosen a Rochebaron this time, because it’s not extremely pungent and has a very creamy texture, a bit like brie. But sometimes I use a more pungent one like Danish Blue as well. I cut this into small cubes. Not too much or it will completely dominate the salad.

Finish with some extra virgin olive oil as a dressing, together with the juice from peeling and slicing the oranges. Same goes for this salad, play around with ingredients you like and leave out things you don’t like. It’s all good.

So I made an endive and orange salad for dinner yesterday, and I thought it would be a nice excuse to show you how to clean oranges the professional way, ending up with those pretty little segments without skins. I didn’t figure out how to do this until I was 32, and my mother still doesn’t get it. But it’s pretty awesome. 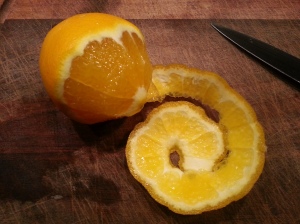 The type of orange doesn’t matter. I always buy what we call “juicing oranges”, because oranges that are meant to be held in the hand while eating them tend to be less juicy (because of messiness). And I like juicy.

So yeah, this is going to be messy. If you have sensory difficulties with dirty and/or sticky hands, keep the tap running so you can rinse your hands whenever you need to. 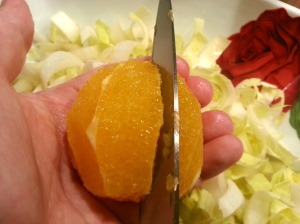 First, you need to cut away the white rind. It takes some getting used to, but if you start with cutting the “top” of the orange off, you can see exactly how thickly you need to peel this baby. I always peel the oranges over a bowl, so I can catch the juice as well. I did mention that this is going to get messy, right?

Once you have gotten all of the white rind off, you can hold the orange in one hand and take a sharp knife to slice close to the white “divider” thingie.

This is actually the skin of one of the segments. Don’t worry about slicing very closely to the “divider”, you’re going to end up with different size segments anyway because nature is chaotic like that. So just slice somewhere next to it and don’t worry about not getting it right the first time. 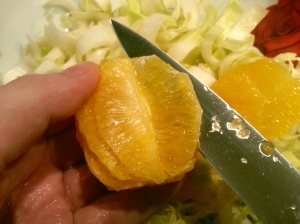 Next, you’re going to do the exact same on the opposite side of the segment. So because I’m right-handed, first I slice on the right of the “divider”, then I move to the right and slice on the LEFT side of the next “divider”. (I’d really appreciate suggestions on how to call these, by the way. Divider sounds idiotic). If you’re left-handed, it’s probably easier to mirror this.

Once you’ve made those two slices, you can simply lift out your orange segment with a flick of your knife.

Then you can move on to the next segment, again making a slice right of the “divider”. You can see the thickness of the segment skin in the picture.

Keep on working your way down through all the segments, and keep rinsing your hands if you need to, because they’re going to be covered in orange juice.

If you used the same trick as me, doing this above a big bowl, you’re going to end up with:

I will do a follow-up post for the endive salad, which is also pretty awesome but I know most people hate endives.